Aggressive Driving – A Leading Cause Of Car Accidents In Bradenton 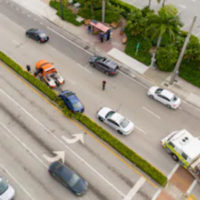 With the amount of traffic in our area, even the most laid-back of drivers can lose their tempers. Aggressive driving is a common problem and a frequent cause of car accidents in Bradenton. Find out more about the risks and what to do if a crash happens.

Aggressive driving involves behaving in a threatening manner towards others and taking actions that could put them at risk. 15 states have laws that directly address aggressive driving and ours is one of them. Under the Florida Statutes, the following actions are considered illegal and could result in serious criminal penalties, as well as personal liability if a car accident in Bradenton happens:

While classified separately under state laws, speeding and going too fast for conditions is another common aggressive driving behavior. Not only does it increase the risks of a car accident, but it also increases the chances of severe and potentially life-threatening personal injuries.

Involved In An Aggressive Driving-Related Car Accident In Bradenton?

According to the American Automobile Association (AAA), more than 80 percent of all motorists admit engaging in some type of aggressive driving behavior in any given month. Being vigilant about following the rules of the road, maintaining adequate distance between you and other vehicles, allowing yourself plenty of time to reach your destination, and not taking the actions of other drivers personally can all help to reduce your aggressive driving risks.

If another driver behaves in an aggressive manner towards you, take the following steps to help protect your personal safety:

If you are involved in a car accident in Bradenton with an aggressive driver, get the make, model, and license plate number for the vehicle and notify the police. Lock your doors and remain in your car until help arrives. Once the police come, get the driver’s contact and insurance information and gather evidence, such as photos from the scene and contact information for any witnesses.

At the Law Office of Steven G. Lavely, our experienced Bradenton car accident attorney helps you hold aggressive drivers accountable so you can get the compensation you are entitled to in a claim. Give us a call or contact our office online to request a consultation today.