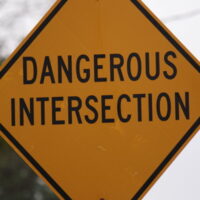 Car accidents in Bradenton are unfortunately common, and one of the places they are most likely to occur is intersections. It is important for drivers to remain alert and cautious anytime they are approaching an intersection. These crashes happen suddenly, pose major risks in terms of personal injuries, and are often complex to resolve. Our Bradenton car accident lawyer explains more about how they happen and how to protect your rights to compensation in the aftermath.

A recent car accident in Bradenton shut down a local road and left multiple drivers involved suffering potentially serious personal injuries. According to a September 16, 2022 Bradenton Herald news report, it happened at the intersection of U.S. 41 and Cortez Road.

Police reports indicate that several drivers were stopped at the intersection, waiting for the light, as traffic flowed in an eastbound direction. A man driving a Cadillac was heading northbound on U.S. 41 and ran right through the red light. He ended up crashing into the side of a Ford truck, which triggered a chain reaction. The truck was then pushed into another vehicle, which in turn was pushed into someone else. All four cars ended up in the middle of the intersection, and all drivers involved were taken to local hospitals for treatment of their injuries.

When An Intersection Car Accident Happens

According to statistics from the state Department of Highway Safety and Motor Vehicles (FLHSMV), over half of the nearly 400,000 car accidents in Florida that happen each year occur at intersections. In addition to being among the most common types of crashes, intersection car accidents also have the potential to result in some of the most serious injuries.

Intersection accidents often involve t-bone or side impact crashes, sideswipe accidents, and rear-end collisions. Among the most common causes include:

If you are involved in an intersection accident in Bradenton, report it to the police immediately and seek medical attention as soon as possible. If another driver is at fault, you have the right to file a claim against them seeking compensation for your medical expenses, lost wages, and other costs. However, as multiple motorists may have been involved, these cases are often complex, and you may be accused of being partially to blame. Before admitting liability or taking other actions, speak to our Bradenton car accident lawyer first.

Request A Consultation With Our Bradenton Car Accident Lawyer

Intersection accidents are one of the most common and often complex types of crashes. To protect yourself and your rights in a claim, discuss your options with our experienced Bradenton car accident lawyer before making any statements to insurers or accepting any settlements. Call or contact the Law Office of Steven G. Lavely online to request a consultation today.